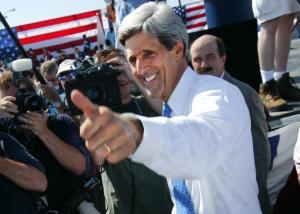 The Democratic challenger, John Kerry, has moved into the lead on the electoral college calculator based on the latest state polls. This is the first time since the conventions that Kerry has been in this position and the news comes as he prepares for the second of the set-piece TV debates with President Bush.

It was Kerry’s performance in the first debate eight days ago that turned the tide for him and since then things have started to move, notch by notch, in his direction.

Meanwhile there’s speculation that George Bush was being advised how to answer questions by a hidden receiver during the first dabate.

It’s the elecrtoral vote calculation and not the national vote tally that counts in this election as Al Gore will tell you. He won on that count four years ago but lost the overall election.

The latest news on the lack of WMDs in Iraq and Donald Rumsfield’s comments about the lack of a link between Saddam and the September 11 hi-jackers have added to the momentum.

The prices are moving in Kerry’s direction although Bush is still a firm favourite. Our CALL – BACK KERRY.