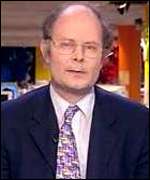 bbc
One of the UK’s leading experts on elections, Professor John Curtice, has added his weight to the view that we might be heading for a hung parrliament.

In a powerfully argued feature in today’s Independent (it’s in the premium section so you have to pay to read it!) Curtice takes to task the view of “the Westminster village” that “theTories are going nowhere, so therefore Labour must be comfortably set for a third victory in a row. Yet such reasoning is folly.”

He argues that with a current poll rating of 22.5% the party could easily beat their best ever performance in 1983 of 26%. He goes on:

While the Liberal Democrats may not run a close second in many Labour seats, by winning the support of disaffected Labour supporters in constituencies where the Conservatives are a reasonably close second, a Liberal Democrat surge could help the Tories win seats. After all, the party’s poll rise to date has already helped markedly to reduce Labour’s national poll lead over the Tories even though the Conservatives themselves have simply stood still. This is a point we have been making repeatedly.

Curtice concludes: “…if the Liberal Democrats take more votes from Labour, and in so doing help the Tories to win seats as well as themselves, then the next election could produce an outcome that the Westminster village studiously ignores – a hung parliament in which no one party has a majority.”

We are often reminded that on the current electoral arithmetic the Tories would need an 11-point lead over Labour before they secure the keys to Downing Street. What is less commonly pointed out is that it would only take a three to four point Tory lead to deny Tony Blair an overall majority. And with Labour’s average poll lead currently standing at just 2.5 percentage points, we are not so far away from that prospect that it can be disregarded.

Meanwhile the Lib Dems have continued to move up in the spread markets. IG’s BUY price is now 71 seats. The numbers are:

It is almost certain that the Labour price will rise after the Hartlepool by-election following the Tory’s usual performance. Wait until then when there could be bargains to be had.

We started saying BUY the LDs when the price was 54-58. People who followed us then could get out now and make a very tidy profit. Stay in there – it could be bigger.