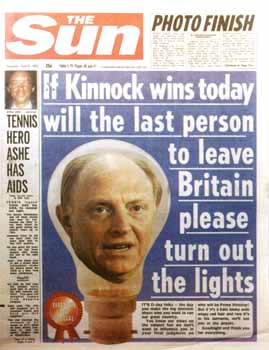 For in the past whenever the Tories have been seen to recover sharply in an eve of election survey they have gone on to win by a mile. Apart from 1992 this happened at the 1970 General Election when Harold Wilson looked certain to win until a late poll in the Evening Standard. At the 2001 General Election the polls were showing leads of 20-30% for Blair and in the end Hague trailed by just 9%. The late Tory swing is common feature of British politics

Looking further at the YouGov figures it’s clear that about 1-2% of Tory voters for the Assembly are going for Livingstone for Mayor. Could the poll and the coverage it received in London yesterday cause at least part of this crucial contingent to switch? Based on previous surveys we think that there is a chance that they might. If it was just 0.75% that would represent a 1.5% boost to Norris.

How do you explain the failure of the markets to respond to the poll showing that it is almost a dead heat? Labour is currently (0430) at 1.14 and lots of money seems to be going on.

The thing that we have learned from the Mayoral betting markets is that we should not have started investing so early. We could have waited until the final poll and have got better prices.

People seem to be backing Labour to show their loyalty -very admirable but totally crazy. There seems to be a lemming type instinct because what they are doing goes completey in the face of the evidence.

Yesterday’s Standard story will enthuse marginal Tories to get and and vote much more than it will persaude reluctant Labour supprters to turnout.

The markets seem to be staying open throughout the day and party activists might start to get a sense of the turnout and this could influence the betting. This is highly unreliable because you need to be able to compare with what the turnout was at the same time in the last election – which was the first Thursday in May when it went darker much earlier. The long summer evenings might cause people to vote later.

UPDATE US ELECTIONS. John Kerry has opened a seven point margin over George Bush in polls this week. Latest prices.