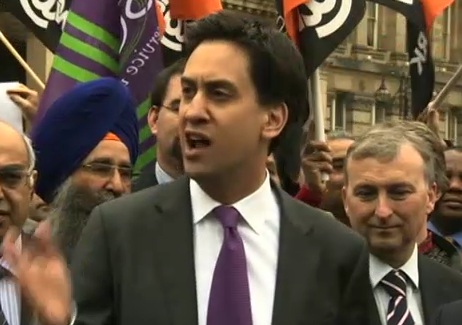 How Labour could win next year without Miliband becoming PM

This time next week, weâ€™ll have the results from the local elections, though not yet the Euros.Â  As a whole, theyâ€™ll tell us a lot about how the land lies going into the last year of the parliament.Â  One set of contests worth keeping an eye on is that in Ed Milibandâ€™s back yard.

On the face of it, the idea that Miliband could lose his seat, even as Labour advance, seems preposterous.Â  After all, Doncaster North and its predecessors have been solidly Labour for decades. Â Â There might just be reasons for doubt.

For a start, Labourâ€™s vote has declined significantly: from nearly 70% in 1997 to 47% in 2010.Â  To some extent, that mirrors Labour nationally but there are other factors in play.Â  The voters there might remain resolutely anti-Tory but that doesnâ€™t necessarily make them pro-Labour.Â  Indeed, in 2010, some 16.3% voted UKIP, BNP or English Democrat, which is still less than the Conservatives but the likelihood is that the Blue vote is near its ceiling there.Â  While UKIP may not like being grouped in that company, the internal problems of the far right have by default not been disadvantageous to UKIP. Â If that 16.3% could be consolidated behind a single candidate, itâ€™s a huge starting share, even before UKIPâ€™s advance these last two years.

One reason for the size of that protest vote is the shambles that is and has been Doncaster Council.Â  Inept politically and with significant failings in delivery, itâ€™s unsurprising that voters turned away from the party that had run it for many years.Â  That those they turned to proved unable to turn it round to any great extent doesnâ€™t undermine the original point: Labour still has an image problem in Doncaster.

The third strand is that while the Labour Party embraces many political traditions, beliefs and world-views across the left of centre â€“ as any aspirant party of government must â€“ they are not all equally appealing in all areas of natural Labour strength.Â  Put simply, Doncaster is not Primrose Hill and Ed Miliband is not a particularly natural fit for the seat.

All of which raises the intriguing question as to how strong a challenge UKIP could pose if they can find the right candidate.Â  We should get some idea next week though only Labour and UKIP are contesting all the wards in Milibandâ€™s constituency which makes it harder to read across to a general election.

Can UKIP find the right candidate?Â  There is an obvious one if they can persuade him, namely Peter Davies, the former elected mayor of Doncaster.Â  Davies won as an English Democrat -Â a party heâ€™s since left – but one of his (many) other former parties was UKIP, which he represented at two European elections and two Westminster ones in the 1990s.Â  He was of course a controversial mayor and unafraid of upsetting people.Â  That said, his outspokenness was an electoral virtue even if its effect in office wasnâ€™t necessarily.Â  On the other hand, while spiky characters are not best suited to executive office, representative office may be another matter.Â  Could he be persuaded to stand for UKIP?Â  Would they want him even if he would?Â  I have no idea.Â  But he would make a formidable candidate in the right seat at the right time, which Doncaster North 2015 may well be.

Decapitation strategies are generally prone to failing.Â  The Lib Dems went big against the Tories in 2005 and made little progress.Â  Neither of the two major parties has lost itsÂ leader’s seat since 1931 (or 1906 if exceptional cases are excluded).Â  It probably wonâ€™t happen in 2015 either but betting is as much about the nature of probablies as will-it-wonâ€™t-it, and this probability isnâ€™t out of the question.