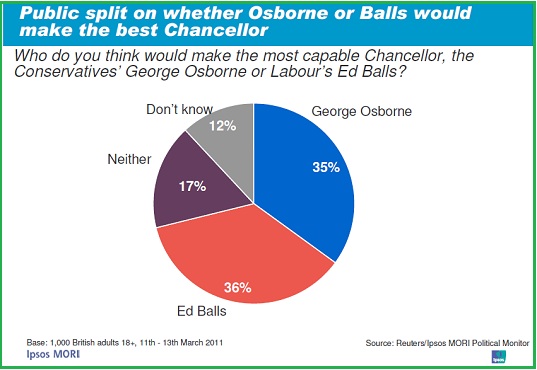 Or can Balls build on his lead?

Perhaps the most surprising finding from today’s MORI poll were the above ones on who would make “best chancellor” for the pollster found, and I think this is a first, that Balls is ahead.

Certainly Labour’s man has been playing a big public role and has always seized opportunities to make news and get coverage.

What a turnaround for the man whose apparent unelectability was a key issue in last autumn’s Labour leadership election.

Osborne, meanwhile, has been quiet and in any case chancellors don’t usually like to do much in public immediately before the budget – which takes place next week.

But given that the economy is by far away the biggest issue Osborne’s statement next week is going be crucial. A few things have been hinted on and Balls has been smart enough to propose things that he thinks are going to happen.

My sense is that Osborne will have a surprise up his sleeve. That’s been the pattern with his previous set piece statements – and the budget is the biggest of them all.