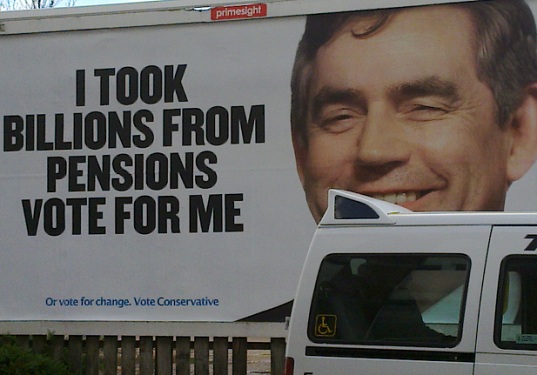 Why’s Labour not using such a traditionallyÂ effective medium?

All elections are different in some way from whatâ€™s gone before as new campaigning techniques and opportunities come in, as new issues and concerns arise and as new candidates find alternative ways of interacting with the electorate. This oneâ€™s no exception.

While much has rightly been made of the TV debates – by far the biggest innovation of the 2010 election – one major component of recent elections seems curiously absent this time: billboard posters. These have defined elections in the past, most famously the 1979 â€˜Labour isnâ€™t Workingâ€™, but also the 1992 â€˜Tax Bombshellâ€™, 1997â€™s â€˜Britain Deserves Betterâ€™ or in 2001 the â€˜Hague/Thatcherâ€™ montage.

The Conservatives have continued to focus heavily since the start of the year on this medium – with varying success – yet where are the Labour posters? Is that party really so short of cash that it canâ€™t afford to compete on the same scale as either the Tories this election or they themselves have in the past three? If so, how is that shortage affecting the rest of their campaign; if not, whereâ€™s it going instead?

The only Labour poster thatâ€™s attracted any attention was the Cameron/Gene Hunt one, unveiled by the Miliband brothers amid much publicity but destined for few if any physical sites.

So where is Labourâ€™s campaign? The Lib Dems have of course proved that you donâ€™t need much money to surge in the polls as long as you catch the public imagination (as indeed UKIP, the Greens and BNP in their own way did in the Euros last year – in fact, you may barely need a campaign at all). However, the Lib Dems have the advantage of being a bit different, unsullied by government and with a presentable and to many surprisingly effective leader in Nick Clegg. Labour was always going to struggle to be seen as any of these, hence the even greater need to simply be seen at all.

Perhaps Iâ€™m not getting a rounded picture. Despite living in whatâ€™s technically a very marginal seat, Labourâ€™s obviously not targeting it as part of what I assume is something of a â€˜hold what we haveâ€™ strategy and if thatâ€˜s the case, fair enough. However, I drive through two marginals to and from work that Labour should be concerned about (Bradford East and West), and can see precious little outward evidence of a campaign there either. Itâ€™s all very odd.

Maybe the moneyâ€™s being spent beneath the radar on targeted literature but if not, if Labour is short of campaign cash, then thatâ€™s got big implications for the prospects of a second election soon after this first. Of course, money can be found to do the basics but each partyâ€™s had five years to put a treasure chest together for this one; itâ€™ll be a lot harder to do it in five months. The problemâ€™s not so much waging the campaign at all, itâ€™s waging it effectively. An expectation of an inability to get the partyâ€™s message across would be a big inhibitor of going back to the country.